Common Cents on the Prairie™

Catching up with the Joneses Has social media made comparison culture worse? Are we actually just trying to keep up with broke people?

On the first-ever episode of Common Cents on the Prairie™, we talked about keeping up with the Joneses. Since then, that episode has continuously been one of our most downloaded. So, we thought we’d catch up with the Joneses a little over two years later — and who better to do that with than Rachel Cruze of Ramsey Solutions?

Rachel is a financial expert, #1 New York Times bestselling author, personality at Ramsey Solutions, and none other than Dave Ramsey’s daughter. So yeah, she knows a thing or two about money. You can read a recap of our conversation below, watch the full episode, or listen to Common Cents on the Prairie™ wherever you stream your podcasts.

Adam: Comparison culture has been around forever. But with social media, it seems to have gotten so much worse. Is it just me?

Rachel: I think it has magnified. Thirty years ago, you had to see the Joneses in person, whether it was coworkers or neighbors or people you went to church with. Now, we carry around these devices in our back pockets, and you carry the Joneses around with you! And they could be 50 miles down the road or 5,000 miles across the world. So I think social media took the issue of keeping up with the Joneses and absolutely magnified it.

Adam: Let’s talk about the Joneses for a minute. Right now, the average American has around $6,000 in credit card debt. The average college graduate leaves school with $35,000 in student loan debt. The average car loan adds another $28,000 in debt. And six out of 10 Americans couldn’t come up with $1,000 right now without going into debt. That’s normal. So Rachel, what exactly are we trying to keep up with?

Rachel: Exactly — broke people. The Joneses are broke. 78% of Americans live paycheck to paycheck. So what you’re seeing on social media is a snapshot; you’re not seeing what’s going on behind the scenes.

Adam: The other complicating factor is that looks can be deceiving on both sides of this thing. We’ve talked about how people can appear to be wealthy but may be broke, but the other side is sometimes people that look average can be really wealthy, and we just have no idea.

Rachel: On our company’s Instagram this weekend, they listed the top cars for the average millionaire in America. Number one was Toyota and number two was Honda. There was no Lamborghini or what you picture in your mind’s eye of what a millionaire drives. For people that have a true million-dollar net worth, a lot of it is through their 401(k) or their paid-off home. You’re not seeing that being driven around.

Adam: Now, this doesn’t mean that we can’t have nice things, right? They just have to fit in our budget. You say, “It’s okay to have nice stuff. Just don’t let your nice stuff have you.” Talk to me about that.

Rachel: Since the Lamborghini wasn’t on the list of top cars millionaires drive, that doesn’t mean that Lamborghinis are wrong or bad. So our stuff can have us in two ways. It can have us through an emotional sense, where the stuff around us becomes who we are. And that’s a dangerous place to be because we will gather and consume as much as possible to make us feel good and to present this idea that we have it all together, that we’re successful, and that we’re doing great. Then, the second way your stuff can have you is through debt. When you borrow money and you borrow it for things, your stuff ends up owning you — you don’t own it. But when you can separate yourself from the thing, and you have the money and you can actually pay for it, that’s when your stuff is in a good position in your life.

Adam: In your book Love Your Life, Not Theirs, you talk about when you bought your first house and couldn’t afford to fill it with furniture right away. And you talked about this embarrassment you felt when you had another couple over for dinner. We’ve all been there, right? So, do you think people are actually judging us on our stuff, or is that just a story we tell ourselves?

Rachel: I think it’s a story we tell ourselves. The more life I’ve lived and the more I’ve experienced things, I’ve realized people don’t think about me as much as I think they think about me. But our mindset when we have people over or we’re going out to dinner or whatever is to feel this validation that everything’s good and orderly. And, genuinely, people don’t care! In fact, people appreciate authenticity so much more these days. There’s something so refreshing about that, rather than having everything buttoned up and in place. Things aren’t perfect — and neither is marriage, and parenting, and my home. You probably don’t want to take your finger at the top of my bookshelf because I don’t think it’s been dusted in months!

Adam: I’ve heard you talk a lot about contentment. What does contentment look like?

Adam: I’ve always struggled with contentment. I’m a high achiever and hypercompetitive. So I wonder, Dr. Rachel, is there any hope for me? Can people who are wired that way ever find peace?

Rachel: Absolutely. When I was writing Love Your Life, Not Theirs, I came up with this formula — right or wrong, I’m not sure. But for me, starting with gratitude and being grateful for where I 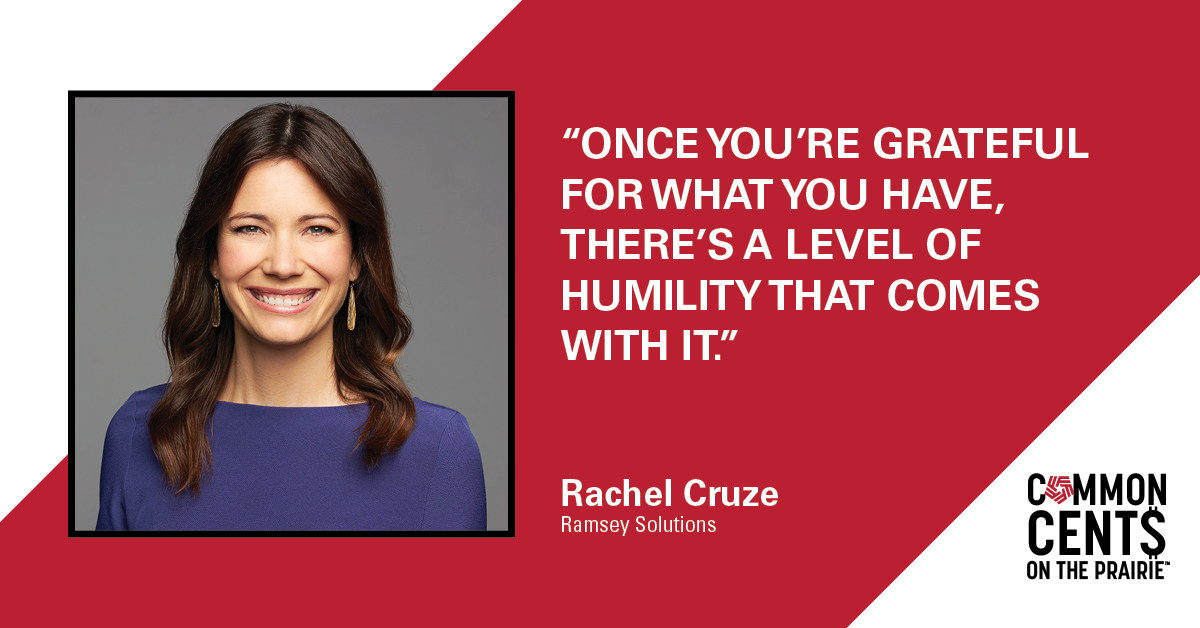 am changes my perspective and how I look at things. And I think once you’re grateful for what you have, there’s a level of humility that comes with it. So gratitude plus humility is that formula that helps me get to that place of contentment.

If you’re ready to quit the comparison game and start building wealth, reach out. We’d love to help!