Many may remember — and others have likely heard the history — when downtown Sioux Falls was not quite the center of life for the city that it is today.

If the walls could talk at the First National Bank building at 100 South Phillips Avenue, they would tell stories of not only the best days in downtown, but also some of the most dismal days.

Originally built in 1976, the building stood witness to multiple downtown revitalization efforts, including one that would leave its mark up until just recently.

In the early 1970s, the city elected to turn parts of Phillips Avenue into a pedestrian mall to compete with the burgeoning indoor malls that would begin to pop up throughout the city.

Our building was built as a standalone structure amid the downtown pedestrian mall.

But by the mid-1980s, this pedestrian mall was deemed a failure, and the city began undoing their efforts and returning Phillips Avenue to the way it was.

Around this same time, in 1985, the First Financial Center building was built to the south of the First National Bank building.

An atrium was added between the two, connecting the buildings and encasing the remains of the pedestrian mall that stood between them. 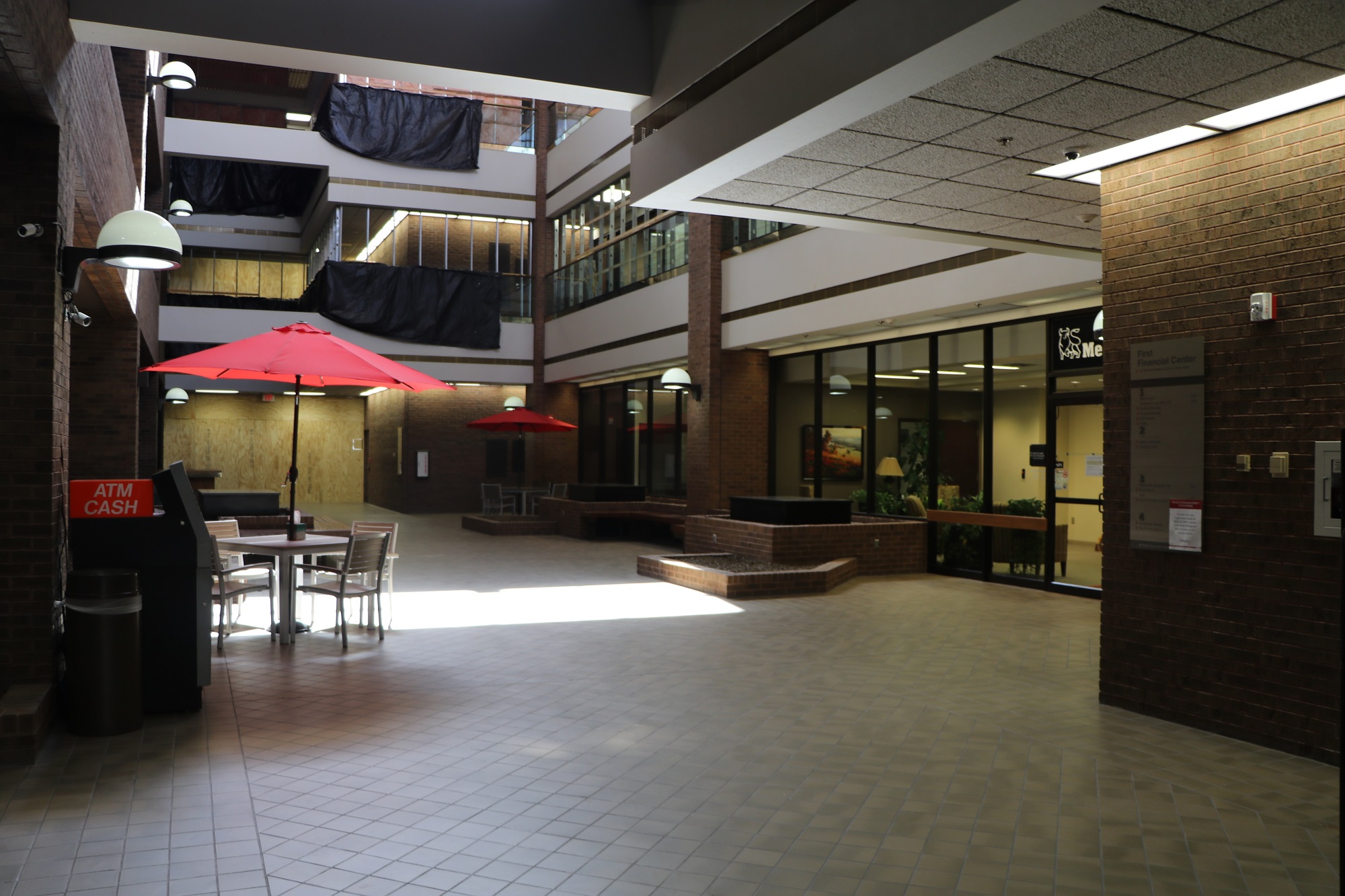 That was how the atrium looked since it was built all the way to 2021.

And our main lobby was left to match, undergoing only minor updates since the building was built in 1976.

During those years, we contributed much to the revitalization of downtown, supporting numerous restaurants and businesses that call the city’s hub home — 605 Running Co., Mama’s Ladas, and Terra Shepherd Boutique & Apothecary, just to name a few.

But for a bank that has been ingrained in downtown Sioux Falls for the past 137 years, it was time to give our 46-year-old building its own revitalization effort.

All it would take for that to happen was a sign from above.

Then, one day, some bricks fell off the outside of our building.

As it would turn out, the fallen bricks indicated that the building’s exterior had some structural issues in need of repair.

And since the outside of the building needed to be redone, our family shareholders decided it was time to update the inside too.

“We always had this dream of taking out the planter on the north side of the building, opening up the first-floor lobby, and adding a grand entrance through the atrium,” said Bob Baker, Director of Corporate Affairs. “With the changes on the outside of the building, we saw an opportunity to make those dreams a reality.”

Our facilities team focused on three main priorities for the remodel: recapturing valuable office space, consolidating the five entrances on the building into two, and updating and modernizing the overall look of the first floor and atrium.

Those were the more technical of the priorities.

The last one was a little more fun: modernizing and updating the space.

In the atrium, the patio furniture is long gone. In its place, you’ll find much more comfortable and stylish seating areas in which to lounge.

To replace the staircase that was removed from the main lobby, a new one was added in the atrium that will better serve both us and the tenants in the First Financial Center.

Gone are the heavy wood accents and open second-floor mezzanine.

Instead, you will find classy wood features, pops of red on chairs and light fixtures, and pentagonal accents on the ceiling to reflect our logo.

As far as personnel goes, the entirety of our Business Banking team — aside from the three Business Bankers located at our Benson Road branch — has office space on the first floor.

The Credit team, which works closely with the Business Banking team, is also located there.

“As a business lending leader in the community, we knew we wanted to have the Business Banking team on the first floor for easy access,” said Baker. “Our Credit department works closely with our Business Bankers, so we also wanted to incorporate that team for better collaboration.”

In addition to the Business Banking side, there is also a full Personal Banking team on the first floor as well as a Mortgage Banker and a Wealth Advisor. 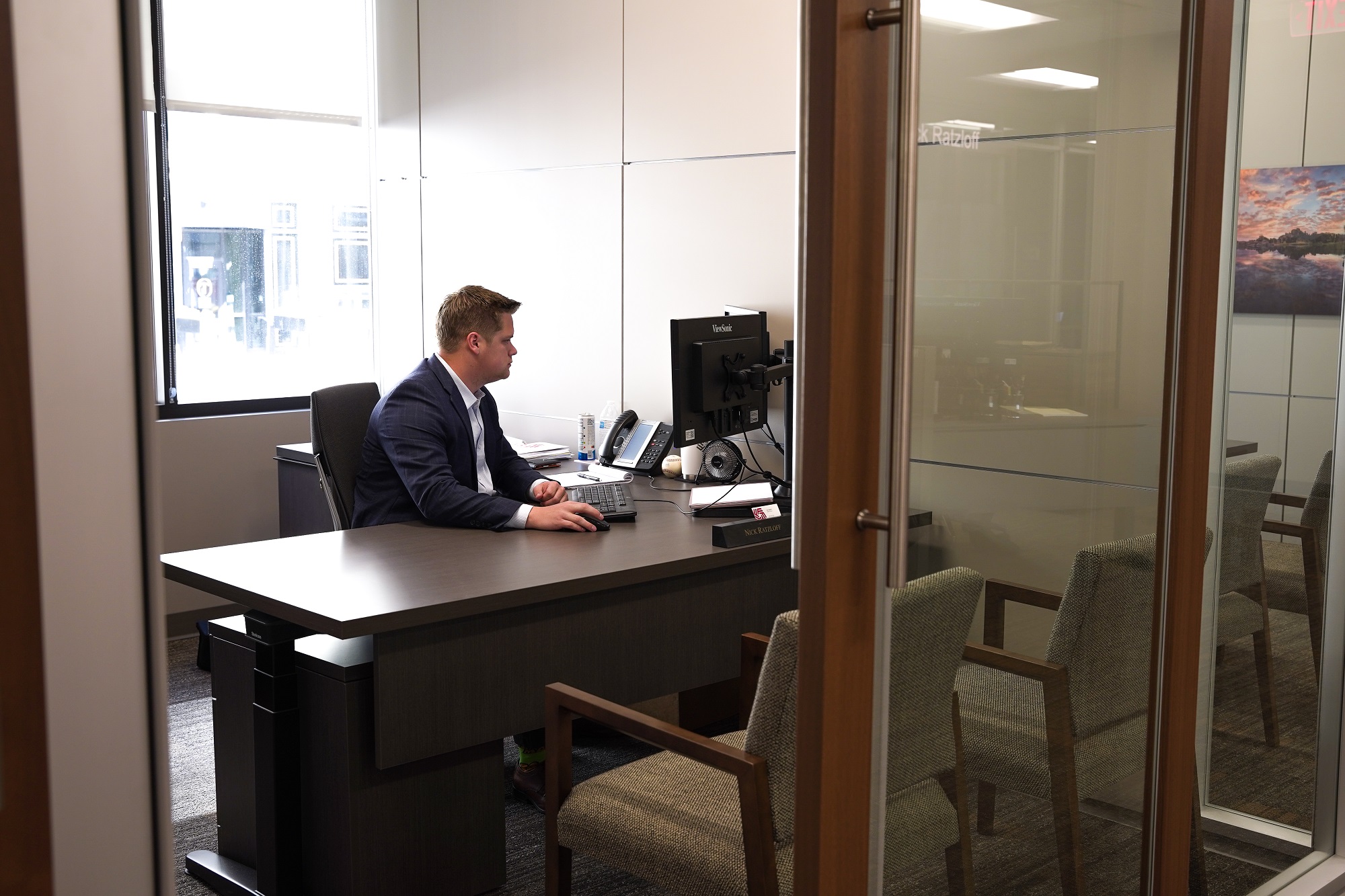 When you come to visit the remodeled First National Bank building, our team will be ready to provide you with an all-around banking experience!

The future at First National Bank

The next phase in the remodel involves renovating and reconfiguring the second floor of the building — a project that Baker estimates will be completed within approximately six to nine months.

But for now, we urge you to come see the updated first floor and atrium for yourself. 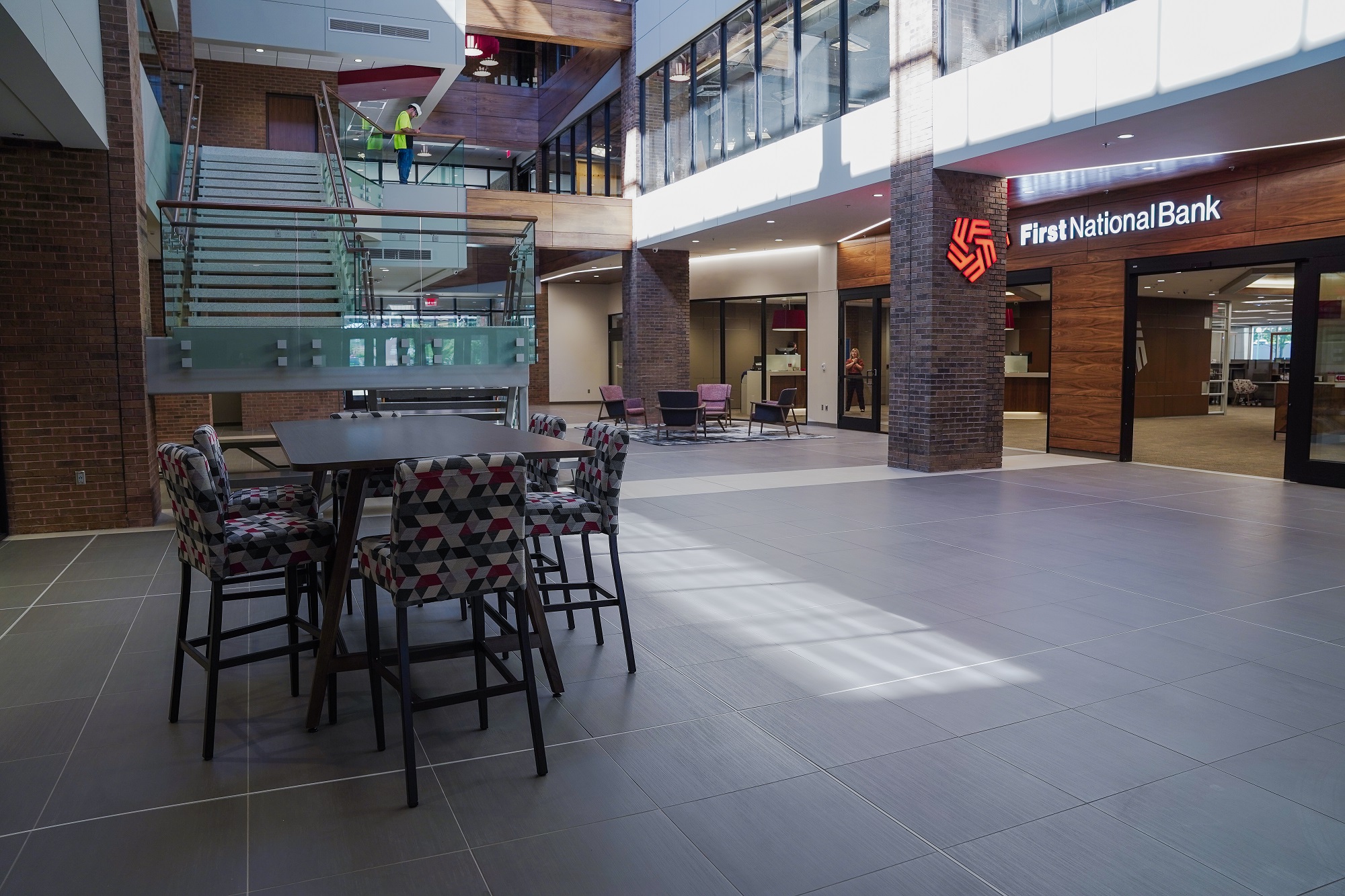 “I encourage everyone to come in and experience the remodel,” said Kae Klinkenborg, Facilities Experience Manager. “It’s hard to even imagine what it looked like before because the transformation is so amazing.”

You can visit our newly renovated Downtown branch at 100 South Phillips Avenue; lobby hours are 9:00 to 4:30!