In the spirit of giving

With the year-end fast approaching, you might be preparing to make donations to your favorite charities for the holiday season. While some people will be making their charitable gifts with farmland, stocks, or even bitcoin, most will be writing checks, paying with credit cards, or doing their giving online.

However you’re making your donations this holiday season, charitable giving done the right way can be beneficial for both your financial wellbeing and your mental wellbeing!

That’s why for this episode of Common Cents on the Prairie™, we sat down with Andy Patterson, president of the Sioux Falls Area Community Foundation, to talk about all things charitable giving. Andy works to connect donors, nonprofits, and civic leaders to help advance ideas and strategic community investments in the Sioux Falls area. He also works closely with the Foundation’s Board of Directors to set the direction for the organization and ensure its connection to the community it serves. In this episode, Andy offers tips on maximizing your charitable gifts for better tax deductions and increased wellbeing, on top of making a difference in the lives of others.

When it comes to making charitable donations, there are two sides to every gift. The first of these is the financial side, which is about giving money away while also earning money back through tax deductions.*

One way to maximize your giving is to donate appreciated assets such as mutual funds or publicly traded stock, which allows you to avoid taking a capital gains hit. Another practice for maximizing your tax deduction is called “deduction timing.”

This method of deduction timing can provide an extra boost to your tax deductions. Of course, you have to have the money available to stack two years of donations into one, but it allows you to maximize your charitable giving in a way that’s tax efficient. 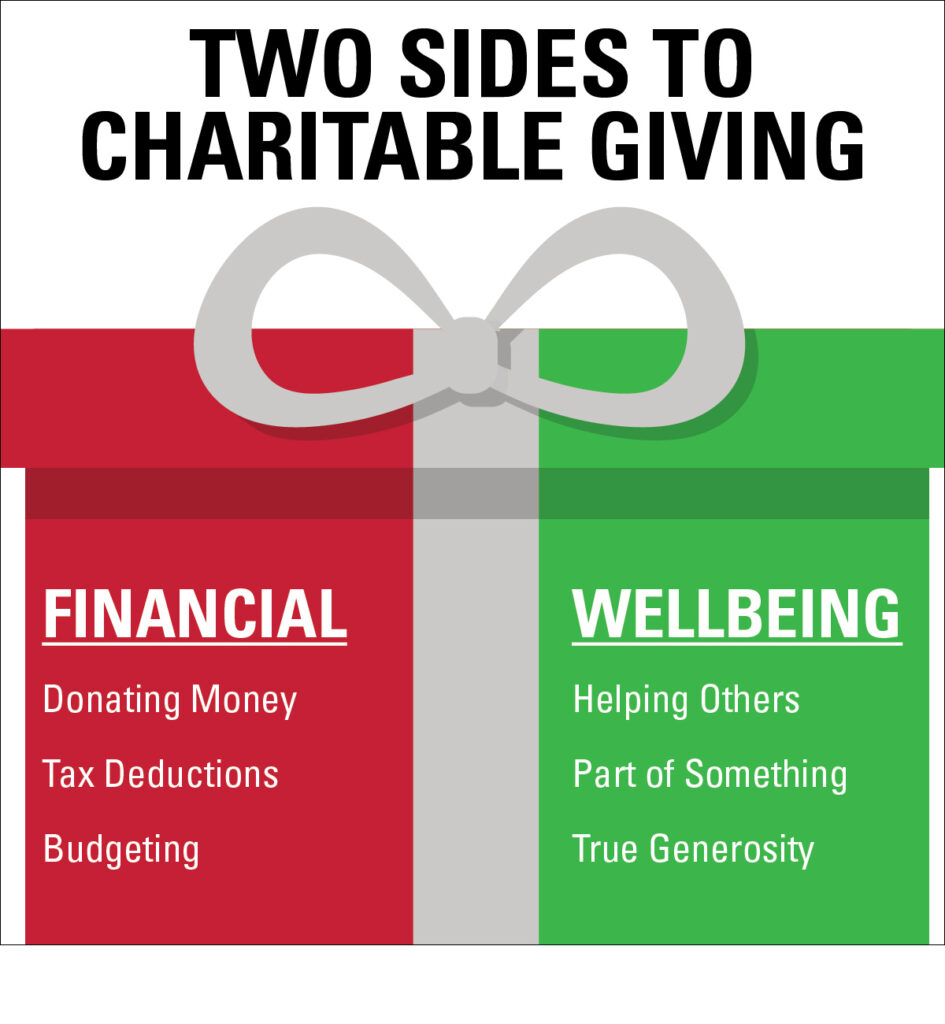 But Andy believes that a majority of people aren’t itemizing their charitable gifts for tax deductions. Rather, most people are making donations to benefit from the other side of charitable giving: increased wellbeing for others and themselves.

Charitable giving is about helping those in need or those less fortunate than yourself; that’s why you should choose charities that align with your values, rather than just donating to whatever organization landed in your mailbox that day. But on top of making a difference in the lives of others, charitable giving done thoughtfully can also be beneficial for your mental wellbeing.

“I think it oftentimes does more for the giver than for the charity,” Andy said. “It’s a little bit of a way for us to say, ‘I’m a part of this.’”

Meanwhile, Andy believes you’re not reaching true generosity until you’ve given up something that would have been for yourself. Charitable giving, at some point in our lives, should involve some trade-offs. For example, maybe you skip out on ordering your morning coffee for a week so you can donate that money to your favorite charity.

Making those sacrifices to help others is how charitable giving can truly change us. In fact, the increase in mental wellbeing we receive from donating is just as important, if not more important, than the tax breaks we can gain.

Have a giving philosophy

In order to receive the greatest benefit for your wellbeing, you need to have a giving philosophy that guides your charitable giving. The first step in building this is to ask some deep questions to determine what charities you want to give to:

What shaped me? What matters to me? How do I want to give back?

Then, you have to consider what’s important to your community. Think of your giving philosophy as a sort of portfolio — there will be different roles in the portfolio for causes that you need to give to.

Some might include a nephew that’s going on a trip and needs support or a little kid that’s selling things door-to-door. These causes can be thought of as “have to-s” because they’re not necessarily a priority to you but are good for the people around you.

Lastly, you should create a budget for your charitable giving. By outlining what causes you want to give to and how much each year, you can ensure that your giving philosophy aligns with your wants and values. It is especially useful for families — parents and grandparents in particular — to have a giving budget and to share that with each other.

Charitable gifts might be taking away from the inheritances that children and grandchildren receive someday; so, to avoid hurt feelings down the road, you should be open and talk as a family about the “why” behind your charitable giving decisions.

These tips still apply for the young donors who are just becoming involved in charitable giving. However, Andy recommends that when young donors are thinking about their giving, they start with a percentage basis as opposed to a dollar amount. It can be hard to reach specific dollar goals when you’re young and paying off debt, but setting a percentage goal based on your available income can help to build discipline.

When deciding where to make those donations, younger donors should look around. What things are important to you? Who do you know? Who’s making an impact around you? Donating to local places that you’ve volunteered at or have seen the work of can help you start to build a giving philosophy. 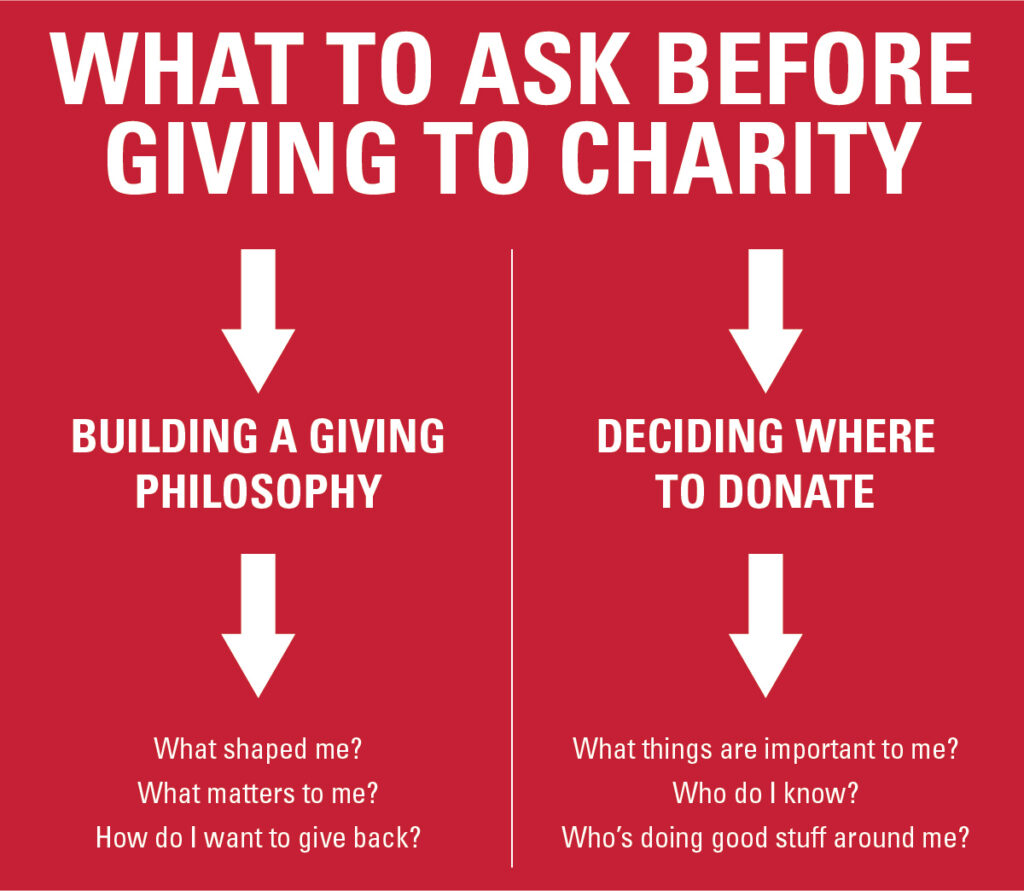 When making your charitable gifts this holiday season, the best tip is this: remember why you’re doing it. Donating to charities gives you a way to participate in the good work they’re doing in communities.

Rather than looking around and saying, “Hey, someone should do something about this,” you’re doing something about it. And the benefits that you and others gain from that are the best holiday gift of all.

Are you ready to build your giving philosophy? Our team would be happy to help. Send us a note.

*Any comments, insights, or strategies discussed in this article are intended to be general in nature and, therefore, may not be suitable for you and your situation, whatever that may be. Before acting on anything written here, please consult with your attorney, CPA, and/or your financial advisor.