Eric and Laryssa Fahrendorf know something about debt. Actually, they know 360,000 somethings about debt.

The couple, who have been married for a little more than a year, graduated from chiropractic school with a combined $360,000 in student loan debt. The sacrifices they’ve made to reduce that debt include living in their parents’ basements for three years, living in a trailer home for one and a half years, and wearing the same clothes for the past five years. But all of that will be worth it when the couple is debt-free in August of 2023.

For the latest episode of Common Cents on the Prairie™, we sat down with Eric and Laryssa to hear their inspiring story. The couple discusses their sacrifices along the way to paying off their student loans and the financial habits they put in place. There are a lot of lessons to be learned about debt, sacrifices, and financial regret in this new installment of the “How We Money” series.

Adam: Let’s talk about debt. One of the reasons why I wanted to have you on the show is because you have big student loan debt. So, let’s start at the beginning: you met at chiropractic school, which I’ve learned later is not cheap. How much total debt did you finish the program with?

Adam: When did it hit you how much that debt was going to impact your lives after school?

Eric: I always knew what the debt meant and where I was at, but when your income is slow to increase early in your career, you put that in the back of your mind and choose to not focus on it. But when Laryssa had her emotional breakdown when we were going to have an enjoyable cross country ski afternoon together — before we can get our boots on, she absolutely loses it — I had to face it right there. There was no getting around it anymore.

Laryssa: At that point, I was close to getting mine paid off. His debt was pretty much just accruing versus us paying anything down, so I was like, “I don’t think I can do this. You’re making little-to-no money. You’re not paying anything back. This is too much to handle.” He got the brunt of it at that point.

Adam: Eric, what emotions did that bring up for you?

Eric: A lot of guilt. Having your soon-to-be fiancé feeling like that beats you down a bit. But it was the best thing that ever happened because we had to take the bull by the horns and fix it. 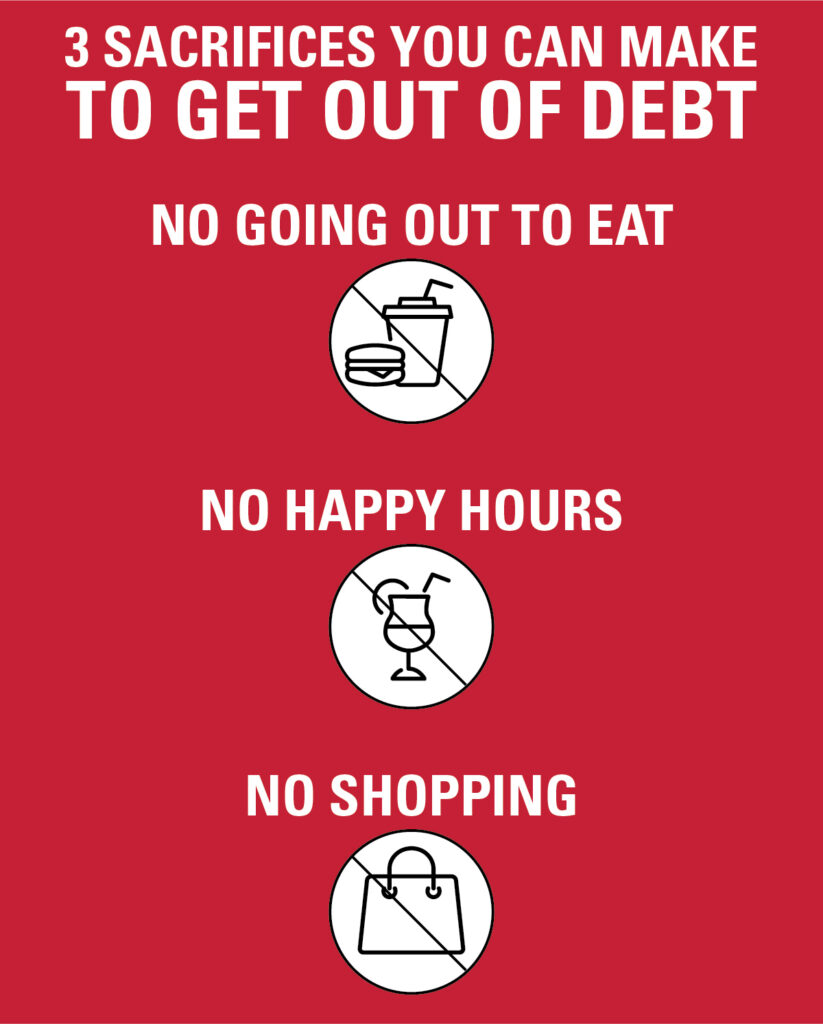 Adam: Let’s talk about what you two did to pay down this debt. You’re still on the journey; you haven’t paid it off yet. But talk about some of the sacrifices that you two have made to get out in front of this.

Eric: Where do we even begin?

Adam: I mean, [scratches beard awkwardly] you could talk about living in a trailer if I had to point to one thing.

Laryssa: And even before the trailer, we both had lived with our parents for the first three years out of school. Eric was in his late 30s, moving back home with the parents.

Eric: More recently: 18 months in a mobile home. When the wind blew, you could see the blinds and window coverings vibrate.

Laryssa: Probably my biggest sacrifice is no cable TV. We stream, which is a pain. That’s one of my biggest motivations to get the debt paid off.

Eric: Usually when it buffers or kicks us out, Laryssa says, “It’s your fault why we’re still streaming. This is because of your debt.”

Adam: Which helps with the guilt, I’m sure.

Eric: She has no problem throwing the guilt on me because she knows that’s my motivation. And she uses that to her benefit.

Eric: We pretty much wear the same clothes we’ve worn for the last five years.

Adam: And you look very nice. [all laugh] I mean, people hear this and think: no shopping, no going out to dinner, I could never do that! Has it felt like a huge sacrifice?

Laryssa: Fortunately, what we enjoy doing doesn’t cost that much money. We enjoy being home. We enjoy spending time with our daughter and our extended families. Our hobbies are all relatively free. We’ve always had our necessities met. And being debt-free in a year and a half is worth it.

Eric: I would say it hurt in the early beginning. I like happy hours and socializing with friends. That came to a screeching halt. Now, it doesn’t hurt so much. It just takes a little time to adjust. And we enjoy working. Part of our passion is serving others. So, when you enjoy working and when you’re working a lot, you don’t have a lot of time to spend money. It’s a win-win.

Adam: I think a lot of people that come out of school with debt just kick the can down the road and say, “We’ll get this paid off eventually.” And you haven’t done that. You’ve buckled down and want to get this behind you, which is inspiring. How do you balance your short-term goals with your long-term goals?

Laryssa: When we thought it was going to take longer to pay off the student loans, we were trying to mix and match. We still max out our Roth IRAs every month. But once we sat down and figured out that we’ll have the debt paid off in 21 months, we decided to do a hold-off on any of the extra retirement stuff until after that.

Adam: That wouldn’t make sense if you knew it was going to take 10 years to pay off this debt. You couldn’t put off retirement savings for that long.

Adam: How do you talk about your goals and how you’re going to reach them?

Eric: We usually reserve those for happy hours on our sofa. When we were in the trailer, we did a lot of dreaming about when we could get out of that place. But our lifestyle isn’t going to change much at all, other than significantly more retirement contributions.

Laryssa: And cable TV. [all laugh]

Eric: Streaming is over the same month our debt is gone. We want every channel under the sun.

Adam: It’s so important to have those goals, and sometimes they can seem like the smallest things in the world, but you’ve got to dream. Otherwise, it can be hard to hang in there for as long as you have. So, financially speaking, what’s most important to you at this stage in your lives?

Eric: Getting out of debt. Getting that weight off our shoulders as quickly as possible. And then proving Laryssa and my in-laws wrong. [all laugh] That motivates me every day.

Laryssa: But more so paying off the debt so then we can live and give in the near future. 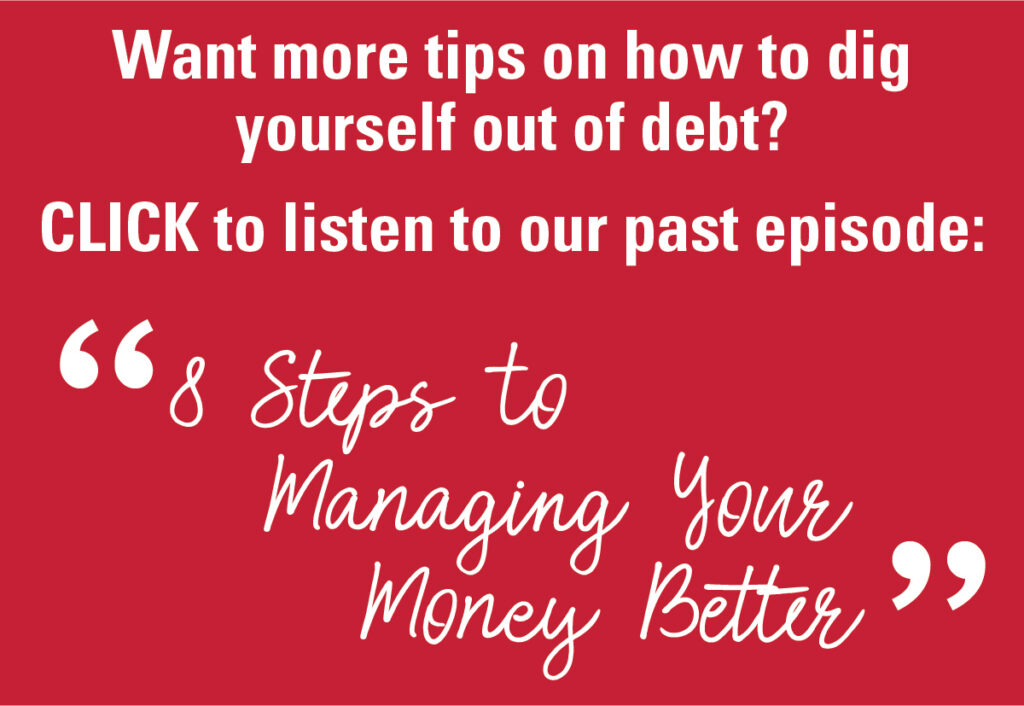 Adam: Well, the habits that you create now that you’re married and have this big debt are going to carry through the rest of your lives even when you don’t have the debt. You’ve learned to become savers and to become good budgeters, and I can guarantee that won’t go away the month you pay off that debt. What’s your best money moment so far?

Eric: We closed on our first house three or four weeks ago. We were able to put $50,000 down as a down payment on that house and then still have $100,000 to put down on our student debt come January of 2022. We’ve also cash-flowed two vehicles. Not fancy ones, by any means, but operating ones that we can rely on. And then cash-flowing our wedding.

Laryssa: Having a child too.

Adam: That’s a lot of life in there.

Laryssa: But I think our biggest moment is yet to come, 21 months from now.

Adam: What’s your worst money moment? [long pause] The breakdown in the park?

Laryssa: For sure that meltdown. [all laugh] Eric’s was probably on the receiving end of that.

Eric: Definitely. But it was the best thing too — best and worst all at once.

Adam: You’re not big spenders, but when you think about spending, do you prefer to spend on things or experiences?

Laryssa: Probably more on the experience side of things. When we do buy things, we buy quality things. But we’re into concerts, so I would say more experiences.

Adam: Last question for you: what money advice would you give to your younger selves?

Laryssa: To start being gazelle-intense even while in school. It kind of feels like Monopoly money at that point when it’s not even ours to begin with.

Eric: It didn’t have a lot of value because we weren’t producing value to get it, except for sitting in a lecture hall. But being more intentional about a budget early on and thinking about every dollar that you borrow then because it has to be paid back with interest down the road. That is our biggest regret and I wish we could have done things differently.

Adam: Don’t we all feel that way. 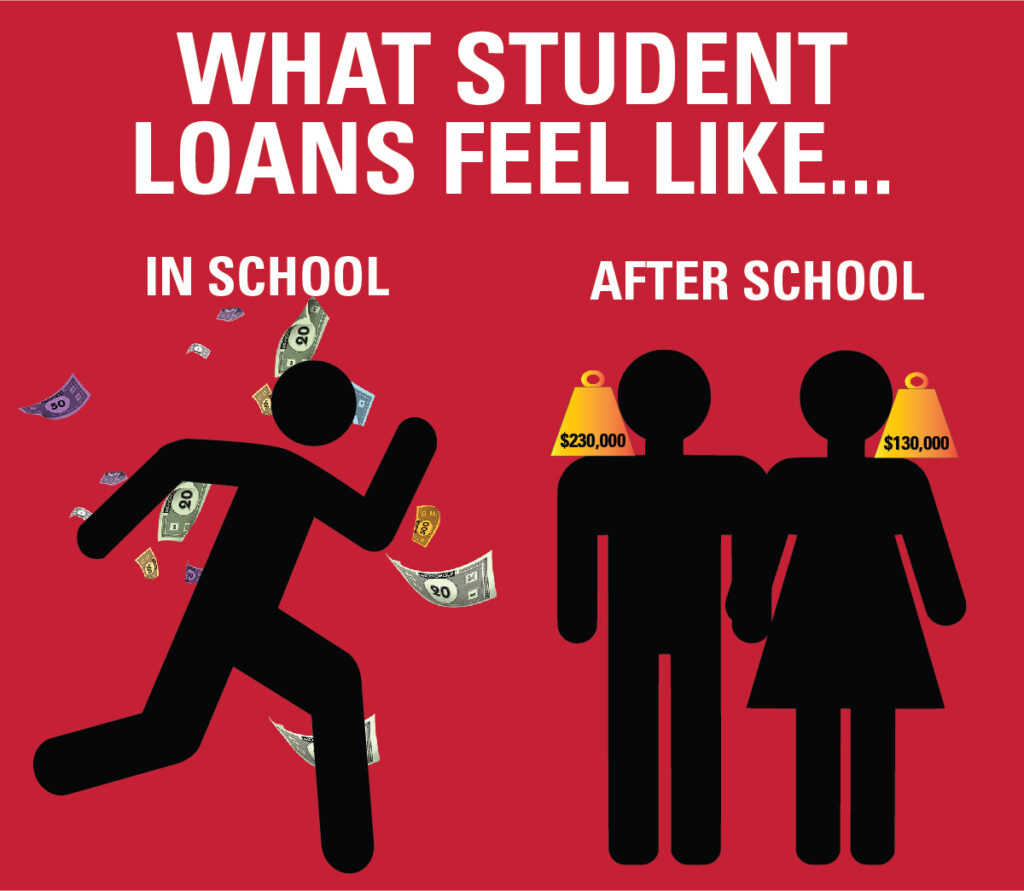 We hope you learned a thing or two from hearing about Eric and Laryssa’s money missteps and successes! If you want to make sure your money story has a happy ending, we’d love to help. Send us a note.